Discorama #1: Alain Pire Experience (BE) + Behind The Pines (BE) + Joe Hicks (UK) at The Water Rats 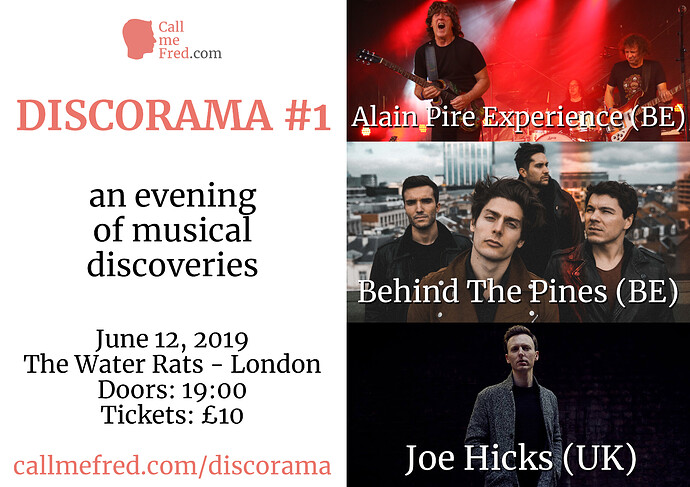 An evening of musical discoveries at The Water Rats, near Kings Cross Station, London.

Alain Pire Experience is a psychedelic trio from Marchin (Belgium). Its aim is to restore the spirit of Psych bands from the 60’s such as Cream, Tomorrow, Beatles circa 66/67, Syd Barrett’s Pink Floyd, Blossom Toes, The Syn, The Open Mind …
The first album « Cambridge » was released in spring 2014 - orders can be placed on http://www.alain-pire.be/
The new opus from the band « Song from the 13th floor » is out and rocking !

Behind The Pines (BE)

B.T.P. is a belgian alternative rock band based in Brussels, consisting of Andrea Battisti (Vocals & Guitar), Johnny De Pessemier (Drums), Gregory Maira (Guitar) and Tomas Caballero (Bass).The Band is born from the alchemy of the two friends singer and drummer.
In January 2017 their two comrades complete the team.
Blending modern sounds and their rock&roll roots, B.T.P. walk through the ages and gives birth to their own aerial punchy vibes.
A first Ep is born. The single « IN THE MIRROR » is actually in rotation on Mint Radio & Classic 21.

Raised in the rural market town of Newbury; English Singer-Songwriter Joe Hicks blends pop, blues and folk influences, combining intricate guitar composition with classic pop song-craft. Picking up the guitar at the age of 8, Joe has been able to build a highly individual musical identity, spending his earlier years as a guitar player in numerous varied stylistic projects following a childhood of classical training. Fusing pop with R&B, gossamer melody with liquid guitar work, Hicks released his first solo single ‹ Best Clothes › at the start of 2017. Soon after, the now 28 year old was made ‹ BBC Introducing Artist of the Week › on the regional ‹ Georgey Tonight › radio program, receiving extensive airplay across the U.K. Third single ‹ Talk to Me › dramatically increased Hicks’ audience, being playlisted heavily on Spotify and Soundcloud collections around the globe including Sofar Sounds ‘Best of 2017 Worldwide’.

In the two years since his debut single, the singer-songwriter has gradually built up a sizeable online following (500K Spotify streams), helped on by extensive support from BBC Introducing and a CLASH ’Track of the Day’ featuring for ‘Burning’. 2018 saw him support BRITS critics choice winner Sam Fender in Oxford, play a slot on the BBC Introducing stage at the Big Feastival and play 15 Sofar Sounds shows across the UK.