Arielle Dombasle & Nicolas Ker in concert at The Tabernacle

Famed French creative polymaths Arielle Dombasle and Nicolas Ker will be performing their oeneric English album La Rivière Atlantique at The Tabernacle in London on Tuesday 25 June in collaboration with The Hexagon Society.

Following on from the success of their surreal feature film Alien Crystal Palace, inspired by visionary powerhouses including Nick Cave, David Bowie and Philip K. Dick, the Parisian electro-rock duo is now touring with the album that marked the beginning of their creative collaboration. The psychedelic film delves into deeply philosophical subjects, inspired by Plato’s idea that humans were originally complete beings who were cut in half and condemned to wander tirelessly to the search for their missing part.

La Rivière Atlantique, which despite its French name is exclusively sung in English,is a romantic and oneiric tribute to the liners which used to travel the seas andis reminiscent of the darkly intimate tones of PJ Harvey and Nick Cave. The electro-rock album, which the pair describe as a “musical novel”, is an intense musical conversation between Dombasle and Ker, their magnetic complicity is apparent with her high ethereal tones complementing his deeper timbre. The concert was organised by The Hexagon Society, a Franco-British charity promoting writers, intellectuals and artists from France in London, creating a cultural bridge through unique cultural content.

Arielle Dombasle is a Franco-American singer, actress, director and model, born in America to French parents and brought up in Mexico. She has worked with acclaimed French directors including Alain Robbe-Grillet, Eric Rohmer, Raoul Ruiz and Clause Lelouch. Films such as Un Indien dans la Ville and Astèrix and Obélix made her a household name in her native France and roles in popular American series Miami Vice and Lace II catapulted her to international stardom. Dombasle directed her first film Chassé-Croisé at the age of 20, she then went on to make French classics Les Pyramides Bleues and Opium . The creative polymath is also a renowned singer, her first two albums Liberta and Extase were a huge success and her third album Amor Amor went platinum.

Nicolas Ker is a French singer, composer and lyricist born in Phnom Penh, Cambodia. He grew up in Egypt, Turkey and Réunion before returning to France. He has played all over the world as a frontman in bands including Paris, Diplomatic Shit, Opera, Aladdin and the renowned Poni Hoax. Dombasle and Kerr are now in the process working on their new LP Empire . 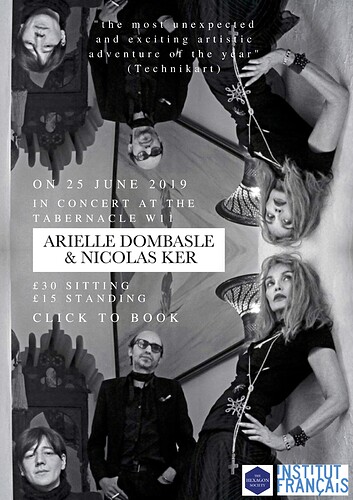